Marianne Muzio got hooked on tennis when she took lessons after moving to Silveridge. Now she’s vice president of the tennis club. 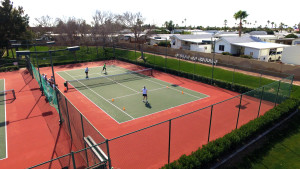 “A lot of people have doubts when they start. But once they try it, they find out how much fun it is and become competitive,” she says. “We absolutely
love new members. They bring fresh ideas and new abilities to the game and the club. We’re always looking for more people to join us.”

Socialization is an important part of the sport. “It’s like making 120 new friends,” says Marianne. Plus, you get to meet players from other parks. There’s
always plenty to talk about after the final point is scored.

“People tell us Silveridge is one of the friendliest parks in the league,” says Brona Freeman, East Valley Senior Tennis League secretary/treasurer who lives at Silveridge. “People like to come here to play because we try to be good hosts. The entire environment is welcoming.” After the last set, coffee and snacks are served so everyone has a chance to visit and relive the games.

“We’re very supportive of our members,” says Marianne. “We watch each other’s matches and follow our teams through the season.”

The park has four courts available. Two are lighted for evening play. Several times a year, free lessons are offered to beginners. For players who want to improve their game, there are coaches for each team. Everyone is willing to help you succeed and enjoy a new activity.

Silveridge’s tennis club is one of sixteen that make up the East Valley Senior Tennis League’s 3,000 member roster, making it the largest senior league in the country.

“Silveridge has been in the league for many years. As a smaller club, we need more members to keep competing,” Brona says. “Our 3.5 team was combined with Sunland’s team for a couple of years but the big news for the coming season is that they will be separate again. Silveridge players are coming back.”

While league play ends in early March, there are four large tournaments after that. Medals will be given for first, second and third place winners, plus prizes. Look for updates and photos at the residents’ section of the park website (silveridge.com/sun).