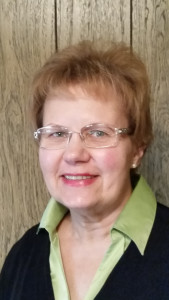 For snowbirds, the computer can be a lifeline to friends and family back home – a way to pay the bills, read the hometown newspaper, keep up with the grandkids and so much more. Carol Folker says, “We’ve got 300 members in the club now. Retirees aren’t just sitting around, they’re active and want to know all the things computers can do.”

And what can they do? It starts slowly but then you get a link to a cute cat video on Facebook, a how-to cooking lesson on YouTube and the next thing you know, you’re hooked on Pinterest and checking out e-books from the library for your Kindle.

“It used to be older people sat around and waited for visits or phone calls from kids and grandkids. It’s not that way anymore,” Carol says. “The genealogy group started with twelve members and now has twenty-three. At the computer club meeting, 121 members showed up last week. There’s just so much to discover.”

Beyond staying in touch and reading online content, some of the big draws in the RV park are special interest groups (known as SIGs) for subjects like genealogy and photography. “It’s a great way to interact, stay engaged and learn something new.

Seniors don’t have to rely on their children and grandchildren to teach them,” Carol says. “They learn new skills on their own and if they hit a snag, well, generally, they call my husband, Mike, to walk them through the solution.”

The Silvercom club offers classes in Adobe, notepads, Iphones and Excel and each draw a weekly group of about twenty-five to share ideas and information.

Like Carol, members aren’t chained to the computer desk. While some, like her husband Mike, still have an actual camera, many take photos with their smart phones, sync with the laptop and share on Facebook. Classes are offered to show you how to do all of these things.

The club meets on Mondays and although Carol sometimes thinks they’ve covered every question possible, there’s always a new topic to explore. Members range in age from about 50 to 94. 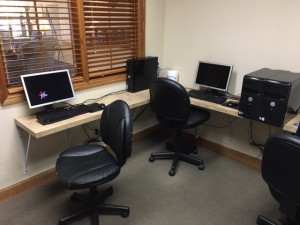 WHAT COMPUTER SHOULD YOU OWN? OR DO YOU NEED TO OWN ONE?

What if you don’t have a computer? You can get recommendations on what to buy at the computer club. Or you can simply can use the computers in the computer area (next to the Business Office). Or if you have or have a “dinosaur” and want something new, you check out the suggestions in this article:

And what about those old computers or cell phones you no longer need or want? Recycle them. Best Buy’s website states, “We will take all kinds of used tech, no matter where you bought it or how old it is. We’ve collected and responsibly disposed of more than 1 billion pounds of electronics and appliances, making us the largest retail collection program in the U.S.”

OBSTACLES TO COMPUTER USE

Beginners often worry they’ll break the computer. You have to try really hard to do irreparable damage. Considering the cost and technology involved, it’s always hard to believe “turn it off, count to thirty and try again” will fix many problems. If that doesn’t work, odds are, someone at the computer club already did the same thing and can tell you how to undo it.

As far as viruses go, don’t click on links unless you trust the source, don’t panic when told your account at the bank has been hacked or freak out when the flashing box pops up saying your computer has errors that must be fixed. One recent scam is a phone call to say Microsoft is cracking down on hackers and noticed unusual activity on your computer. If you don’t repair it right now, it could crash. You’d then be told to go to a site and click on a button that allows the caller to remotely help you fix the damage. These calls are as legit as the Nigerian Prince who wants to share 44.7 million US dollars with you. Don’t waste your time – just hang up!

Asked to sum up her love for computers, Carol says, “You can visit the world on a laptop, notepad or cell phone. Join a group and forget about loneliness. Go to a different learning realm. Computers offer you a way to stay in touch with the rest of the world.”