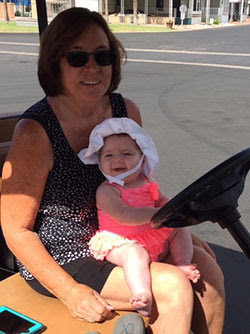 Where do you go to find a good old-fashioned work ethic? It doesn’t grow on trees, but maybe it does grow on farms… or at least it used to.

What got me thinking about farming and work ethics was talking with Rhonda Ciacco, the General Manager of both The Resort and Silveridge. She credits her
South Dakota farm upbringing with instilling in her a whatever-it-takes attitude. Here’s one of her farm memories:

“My family raised beef cattle, milk cows, wheat, and corn. I was the oldest of five and my dad started me early, helping him out. I used to drive the
pickup while he pitched out hay to the cattle. I was too young and too short to reach the gas pedal, so I’d have to scrunch down under the steering
wheel and push it with my hand. My dad would yell and I’d press the gas. One morning I pushed too hard—the truck lurched forward and he went flying off the back end of the truck. He broke both wrists. But he was back out the next morning and so was I.”

Rhonda grew up in South Dakota, then moved to southern Colorado, and that’s where she fell in love with and married Frank Ciacco. That was four decades ago. (Frank passed away in 2015.)

Shortly after Rhonda and Frank married, he went to work for one of the old phone companies, US West, while she became what she jokingly calls a Domestic Engineer. When the kids were raised, she went
to work for her brother’s trucking company. Then Frank took early retirement, although the day after he “retired,” he took a job with another firm, setting
up back-up power for phone companies facilities all over the Southwest.

That’s when Rhonda traded in the stationary life for the road. They bought a 43-foot fifth wheel, which she pulled behind a pickup truck, while Frank drove
the company truck he was required to use. They rented out their house and spent eight years on the road, driving separately across Arizona, Utah, Nevada
and New Mexico, but always headed back to one another.

Did she mind the lonely highways? She says,
“The only time I can remember resenting it was one Valentine’s Day. We were meeting at a truck stop for dinner. I had to park the fifth-wheel out with
the semis and Frank got to park right by the door. Other than that one night, I learned to love the road.”

But one day her husband said to her, “I’m ready to retire again. This time I’m done and I’m going to follow you.” She said, “Then we’re going to Phoenix.”
Or, as it turned out, Mesa. After all those years in South Dakota and Colorado, she was ready for life in the desert.

She wasn’t ready to retire, and having spent all those years pulling the fifth wheel, it seemed natural to call a nearby RV park and see if they were
hiring. That call was to The Resort and they told her the only opening was Gate Guard. She took the job.

“We’re here to help people have a good time. I am always trying to get people out to all the activities. Occasionally I run into someone who woke upAs for her philosophy of managing the parks, Rhonda says.

It was 14 years ago that Rhonda took that first job at The Resort, as Gate Guard.  I asked Rhonda what she made of all those promotions since. She replied modestly, saying, “I always treat the parks as if they were my own. And the people, too—these are my people. Just now I saw a new resident go by and I went out and said, ‘I’ve got to have a hug.’”

“We’re here to help people have a good time. I am always trying to get people out to all the activities. Occasionally I run into someone who woke up looking to be angry at someone and I just say, ‘Come play bingo tonight and sit by me.’ You can’t go to our activities and stay in a bad mood. The
positive energy of these parks is contagious.”

I asked Rhonda if she ever misses her old life, back on the farm: “I still get up to Colorado to visit relatives and I ride horses up there. But growing up on the farm we used to milk cows and separate the cream and then make butter
with a hand-crank churn. These days, if I see those things for sale in antique shops, I want to just run the other way.”

“Who wants to be on a farm in the snow when you can be in the park in the sun?”